Think of yourself and your fellow players as the brilliant minds behind scene and script or plot and dialogue development for your favorite dramatic medium - be it novels, films, afternoon soaps, theater or comic books. Prepare to flip perspectives to move the action forward.  Then bring the game to a close with a multi-perspectival shift.

What’s Worse gets dramatic.  But don’t worry.  What’s Worse is fun and thought-provoking even when everyone plays themselves.  It isn’t about character acting per se -- unless you’re into that!

SETTING UP THE SPACE 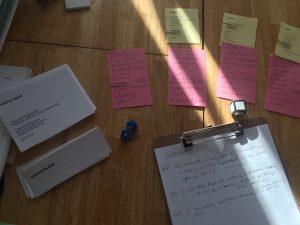 HOW TO DO A WHAT’S WORSE DIALOGUE

Victim, Villain, and Hero can be ambiguous.

If Flow is your Role, you’re going for “the voice of reason.”

MOVE TO THE NEXT DIALOGUE

There are four Focus Cards.  A typical game will include doing four dialogues -- one proceeding from each of the four Focus Cads.  It’s also desirable to mix up the order in which the Focus Cards are used.  So...

Once at least four dialogues of at least four statements each are completed (one starting with each of the four Focus Cards), shift gears to complete the game.