Skip to content
Between a feeling and it mattering, we wait.  It's known colloquially as a "wait and see" attitude.

If you have to wait long enough you might wonder, is there a right way for the feeling to matter? If something else happens, is it true that it did not matter, or is it just that it did not have the result I sought? Am I okay with surprises as far as how my feelings matter?

When you make up your mind that waiting, or surprises, are not okay, any negative reactions to the waiting (mattering-less state) give rise to paranoia.

Paranoia is a public scourge today. Negative reactions to waiting (does it matter?) and being surprised (what if it isn’t pleasant?) collide with the enculturated and often chronic attitude of no time to waste (coffee anyone?). Add to that the truly precarious state of human affairs on the planet and you have the perfect storm for shared, pervasive, and projected paranoia.

Use of the word paranoia, according to its word origin, refers to demented mind. It’s used of course in medical settings to describe the behaviors of people who cannot be reasoned with. I can sympathize, with both sides. Who wants to reason with not mattering or not experience anything pleasant?

Be honest with yourself now — how often do you use ‘paranoid’ to characterize others? And does it always have a negative connotation?

Here's an assumption that is incredibly common at every level of dialogue:  people very different from me don’t matter (I’ll only speak for the U.S., where I live). It used to be a largely unspoken assumption, but it’s now outwardly expressed because of the open audaciousness of the U.S.’s government leadership and reactionary media.

The first thing I wonder when I hear “they’re paranoid” is “you’re the one who’s paranoid at the moment!” Sounds like a petty schoolyard tactic, I know. But with paranoia there’s little other choice. Here’s why. 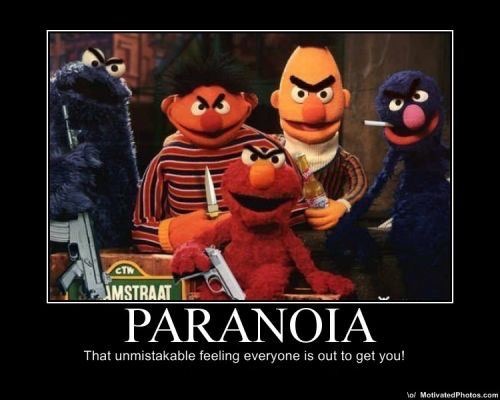 The perception or labeling of paranoia is the reactionary mind seeking refuge from itself. When I declare “you’re the one who’s paranoid…” I do not intend it as a negative label. I mean it instead as an acknowledgment that everyone needs room to rest their mind and engage simple pleasantries. It’s a tried and true way to avoid going off the deep end, so to speak.

Those with the courage to do so say: “I’m feeling reactive right now and really don’t have any business giving input until I’m less so.” I notice that this kind of courage is particularly hard for men within social roles and for women within family roles, given the history of patriarchy.

If you are blessed enough to have a family or other social situations where positive outlets for reactivity are encourage and allowed, you have no excuse for engaging in projecting paranoia on others!

Can anyone say federal mandate for paid vacation time off? 😉