The ontology of language that I will use for this brief review is three-tiered:  natural, formal, and meta.  The first two are well-articulated.  The third is a kind of conjecture made by some throughout the centuries, including ancient notions of logos.  I'll refer to some existing work within these three and to the recognition of the potentiation of humanity possible when coherence among the language tiers is achieved.

The classic example of the limitations of natural language is the game Telephone.  One person whispers a sentence into another's ear and the whispering goes through a number of people before being stated out loud again.  By the time the sentence makes it to the end, it makes no sense and/or is humorous or silly in some way.

Recently, the three tiers were logically explicated in relation to each other in a distinct way, including an analytic view of the limitations of the first two, by Christopher Langan (link below, "The metaformal system: completing the theory of language", Cosmos & History 2018).  Other than being a very difficult character who suffers from considerable paranoia, Langan is a penetrating analytic thinker who earlier developed a formative metaphysics (he calls it a model of the universe) based in part on the concept of a self-configuring self-processing language.  Only later did he come to articulate it in relation to the wider concept of languages using the ontology of natural-formal-meta.

There's an odd, damning wrinkle in Langan's work though.  Lacking a physics to effectively embody an SCSPL, he deems it tautologically true (in the minds of people who understand it) and justifies the irony using a concept of "distributed solipsism", an indirect method of integration he calls sufficient in light of John Wheeler's general physics with its concept of a "participatory universe."  I am of the view that this interpretation is inadequate and fatally flaws the cognitive-based universe claims that he makes.  However, in light of the unique requirements of scaffolding for my own work and the incoherent tendencies among languages, the scheme proves useful on other fronts.

The Work of Bridging the Tiers

Bridging natural and formal languages is a process that has become more complex, and also more promising as an explicit way of engaging reality in the face of globalization, because of the human capacities strengthened through computing.  Case in point is a categorical sense-making schema like IEML.  "IEML is an acronym for Information Economy MetaLanguage. IEML is intended to become a standard for expressing semantic metadata."  Pierre Levy, with a team of collaborators, is its creator.  He first published the book Collective Intelligence in French in 1994.  Levy's early concept of "semantic primitives" recalls for me Victor Raskin's Semantic Script Theory of Humor (1985), which was added to by Alvatore Attardo to develop their General Theory of Verbal Humor (1991). 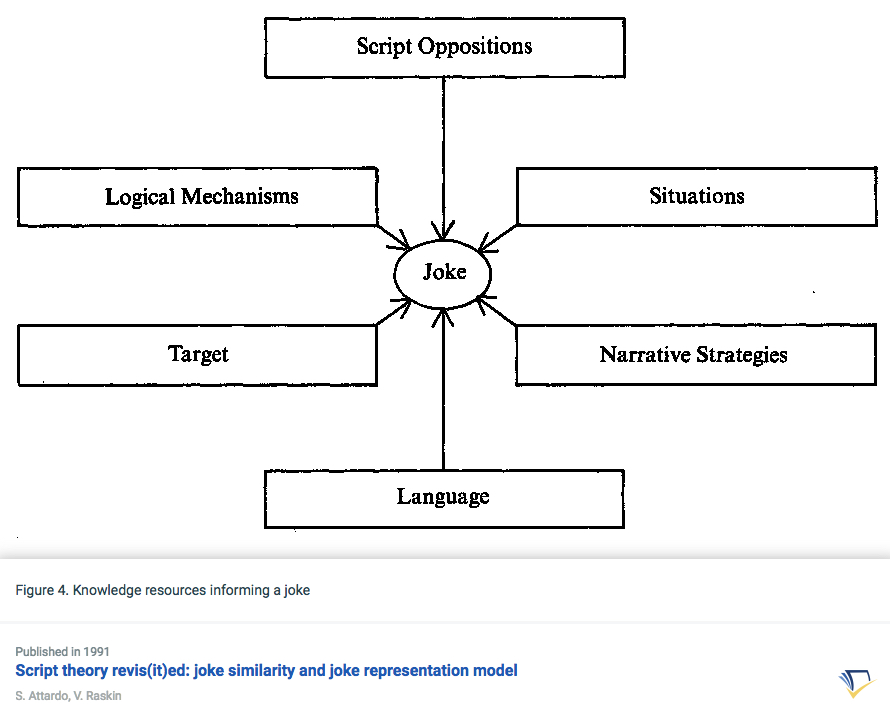 Earlier still was seed work of this kind, both interdisciplinary and heavily conceptual, found in Lakoff and Johnson's Metaphors We Live By (1980).

IEML, like semantic scripts or metaphorical systematicity, are methods by which to capture categorical structures of natural languages.  By applying to natural languages formal structures that operate as meta-structures, more coherent communications among machines and people have been possible.  Another way to describe such a method is that it creates an ontology within an ontology.  (At the level of cognition, I refer to these as complex meaning states.)  As such, its formal and meta aspects reference not the general ontology of natural-formal-meta but derivative, layered levels of meaning.

Bridges from the natural to formal tiers function as support or language lineages, if you will, a sort of ancestral natural language, that can be used similarly to the way a thesaurus is used to modify and expand the richness of linguistic expression.  In the case of IEML, that amounts to the extraction and analysis of meaningful and comparable information from language lineages and parallel expressions.  This has certainly begun to prove useful working with complex, lifeless intelligences (such as search engines and AI).

Bridging formal and meta represents a potential expanding of the natural to formal functions.  But first, is meta language even possible to formalize in a way that it can bridge to the formal language tier?

Langan's work speaks to this.  In "The metaformal system: completing the theory of language" mentioned above, he concludes: "As for the trademark linkage of language and information processing, the Metaformal System M takes it to its logical conclusion by uniting language with the largest and most powerful 'information processing system' conceivable, namely, reality at large."

It's a brilliant dance Langan performs, yet in the end he seems content to apply it for self-satisfying purposes alone.  He does not in his discussion of M articulate the way the content of the meta language relates to natural language.  Rather he indirectly dismisses natural language as if it is of no consequence.  He instead concludes that aligning meta language strictly with formal language is the way existence arises, and this is from cognition alone.  True in its own light but not necessarily, and even unlikely to be, fundamentally true.

To Langan, it seems natural language is necessarily unfettered and thus inconvenient to the expression of M.  His choice is then to exclude it as ontologically irrelevant.  This makes his assertions both circular and, upon close examination reveals the cognitively tautological nature of that particular choice.  Further, it implies that someone like himself, an accomplished thinker in relation to an M that rules out the natural, is the most real, and arguably the only real thing, in the universe.  Regardless of this particular limitation, one can extend many of Langan's existential arguments to a more broad conception of metaformal language, one that does not deny the complex role and function of natural language.

What philosophers often refer to as logos is an ancient concept broadly parallel to the metaformal system M suggested in Langan's analysis.  In relation to my own contributions, ONT is a logos-esque M that unites all three: natural-formal-meta.  This is possible due to reflecting the cosmologically coherent emergent source of form and possibility expressed in Novel View.

The essential process of bridging all the way from natural to meta is attested to generally in the work of modern academic philosopher Miguel Espinoza. He approaches the opportunity of achieving such a bridge less as one of reconciling languages but as one of revealing the intelligibility of nature.  Published in French in 1998 and in English in 2019, his book A Theory of Intelligibility: A Contribution to the Revival of the Philosophy of Nature asserts, among other things, "Proposition 4: The intrinsic intelligibility of a system is due to (i) its stability, (ii) the necessity or reason inscribed to it, (iii) the presence of universal aspects or elements, and (iv) the fact that the system has a logos, a principle which organizes its unity."

Espinoza's work is informed in part by the late Rene Thom, the French polymath, who had much to say about philosophy, language and meaning-making from the perspective of form-making (others referred to these as catastrophes, and thus to his theory as "Catastrophe Theory").  Thom's is easily the most generous and open-ended analysis among those mentioned here.  His book Structural Stability and Morphogenesis: A General Theory of Models (French 1972, English 1975) was the reason I started doing what I have spent a lifetime doing.  Recently, Espinoza's journal Scripta Philosophiæ Naturalis republished a review of Thom's quotable contributions as "On René Thom’s Significance for Semiotics, Linguistics and Philosophy" (2021).  Here is one of my favorite Thom quotes:

But I am certain that the human mind would not be fully satisfied with a universe in which all phenomena were governed by a mathematical process that was coherent but totally abstract.  Are we not in wonderland?  In the situation where man is deprived of all possibility of intellectualization, that is, of interpreting geometrically a given process, either he will seek to create, despite everything, through suitable interpretation, an intuitive justification of the process, or he will sink into resigned incomprehension, which habit will change to indifference.

Language meta-ontology suggests a unity that intervenes with language models so as to integrate the possibility of coherent collective participation by humans.  In short,