The logic of how cognition gives rise to rational thought processes is well-understood.  Beginning ages 6-8, we first engage counterfactual thinking. From there the rocket of complex reasoning takes off.

Counterfactuals are special too in that they provide our introduction to irony and paradox... including the ability to surprise oneself.

Eventually, we may find ourselves so acutely aware of irony and paradox from a social perspective that we hardly know how to speak, act, or emote forthrightly.  Or we feel constrained by our own inner tensions and, thus, less likely to surprise ourselves.  Experience is screaming for us to encounter a helping or two of counterfactual maturity.

In the strip above, Calvin encounters his own Theory of Mind, the self-aware psychological condition of the individual that accounts for the capacity for reason as well as for dysfunctions of rational thought processes.  The collective view of Theory of Mind (as in, all people with minds herein understanding experience in part through counterfactual alternatives) is framed by philosophical types as Philosophy of Mind.  There, special attention is given to the role of Theory of Mind in navigating morality and sense-making.

Interestingly, Theory of Mind is not naturally solipsistic or nihilistic.  As children we find no contradiction in treating others, from our place of counterfactual morality and sense-making, as if they too have separate and meaningful Theories of Mind.

Like one might interpret the ancient parable of the blind leading the blind, even the successful balancing of counterfactual alternatives can lead to negative consequences. The reasoning impulse developed in childhood, however complex we can take it with our gadgets and widgets, is not enough.

Too Clever for Our Own Good

Reality can be understood counterfactually best when we are able to track changes in context.  In the most basic sense, this means having an ability to determine the context of someone else’s statement or opinion before judging or empathizing with it.

What tends to happen is that, as contexts arise that we desire to control or repeat, we train our mind toward thoughts that recreate the desired context. (This is possible through being hyper-tautological in our counterfactuality.)  And that’s not always a bad thing.  When we have a particular agenda that is highly beneficial to us, we can hardly be faulted for using counterfactuals to keep the context that works for us from being questioned.  It’s important, however, that we recognize it for what it is: benevolent manipulation.

As Philosophy of Mind evokes the collective of individual Theories of Mind, I suggest that counterfactual thinking has a collective structure.  We apply counterfactuality collectively, and for the purpose of finding sensible approaches to complex social problems, through a process I call equivalent switching.

To each counterfactual thinker, scenarios play out mentally as alternatives achieved by considering different options or perspectives.  Our minds seek to reconcile what they perceive with the contexts they are open to.  A mind that is closed to a certain context handles the non-knowing one of two ways:  inquiring more deeply about context, or switching equivalents.  If we are unaware of the pitfalls of the later, it’s not difficult to convince ourselves that switching equivalents is akin to acting in good faith under difficult circumstances.  And thus we enter a bind and those binds are felt collectively.

There’s a certain irony in justifying counterfactual equivalent-switching, which can be a very dynamic process.  We engage it presuming it makes us more socially sensitive.  But like Calvin's harmless evil folly, in so doing, even collectively, each of us alone is arbitrating alternatives, setting the “context”, aka playing all sides, all by ourselves.  When we fail to gain, or reject, an understanding of the stakes at play for others, we engage our own binds and shrink the context to what is compatible with our existing thinking!

The resigned social acceptability of sitting in groups together each staring at our own personal electronic devices -- engaging the digital collective -- is an indication of just how engaged we can be with the hypnotic power of shared mental experiences that bind.

We recognize others' equivalent-switching as The Blame Game.  It is easy to see others’ blaming; much more difficult to make out our own.  As an acceptable, if not preferred, source of social “sensitivity” Blame Game equivalent-switching is terribly insidious.  Collective reliance on Blame Game leads to a failure of mutual understanding, including development of workable social contracts.  It’s a painfully obvious outcome to a problem most don’t realize even exists:  immature counterfactuality.

A Dream of Greater Good

Here’s an example.  What does a mature, successful version of social contracts, manifest through organizing ourselves collectively, look like? In a phrase: Greater Good.

The reality of organizing toward wide social benefit is not so simple though. In fact, it’s downright perplexing, and it comes down to something quite logical.  As clever as we can be, the Blame Game pattern of arriving at complex logic by unwittingly relying on our mind's ability to switch equivalents keeps our attention on predicaments rather than solutions. Furthermore, group-think based on counterfactual alternative-driven logics both fosters predicaments and limits solutions to those that can attend to the tensions and ironies that keep the group-think intact.

Three equivalents, or counterfactual alternatives, surface for organizing effectively -- a dynamic context for Greater Good that makes it adaptable to equivalent switching and, with that, susceptible to immature counterfactuality.  Those three are: Operate as an Underworld, as in mafia, "deep state," cabal, or secret club.  Operate from Idealism, as in missions, causes, and charities. Or operate through Empowerment, as in governments or businesses that strategically lift up the right people.  When it comes to organizing effectively, an equivalent quality among these three operational counterfactual equivalents is that each is effective by virtue of being above reproach.

As I suggested earlier, switching equivalents constrains logic. But how?

First consider the general structure of the translational perceptual device I call The Glyph.  When our collective thinking uses equivalent switching for a triad of any sort, the relational structure of The Glyph tends to get co-opted.  The consequence is a trivialization or over-simplification of a complex set of relationships.  The choice to use equivalents (instead of looking deeper into context) fools us.

The logic of switching gets particularly tricky because the figure referred to as the Switching Glyph (above) shares the same structurally represented logic as the standard Glyph (below). 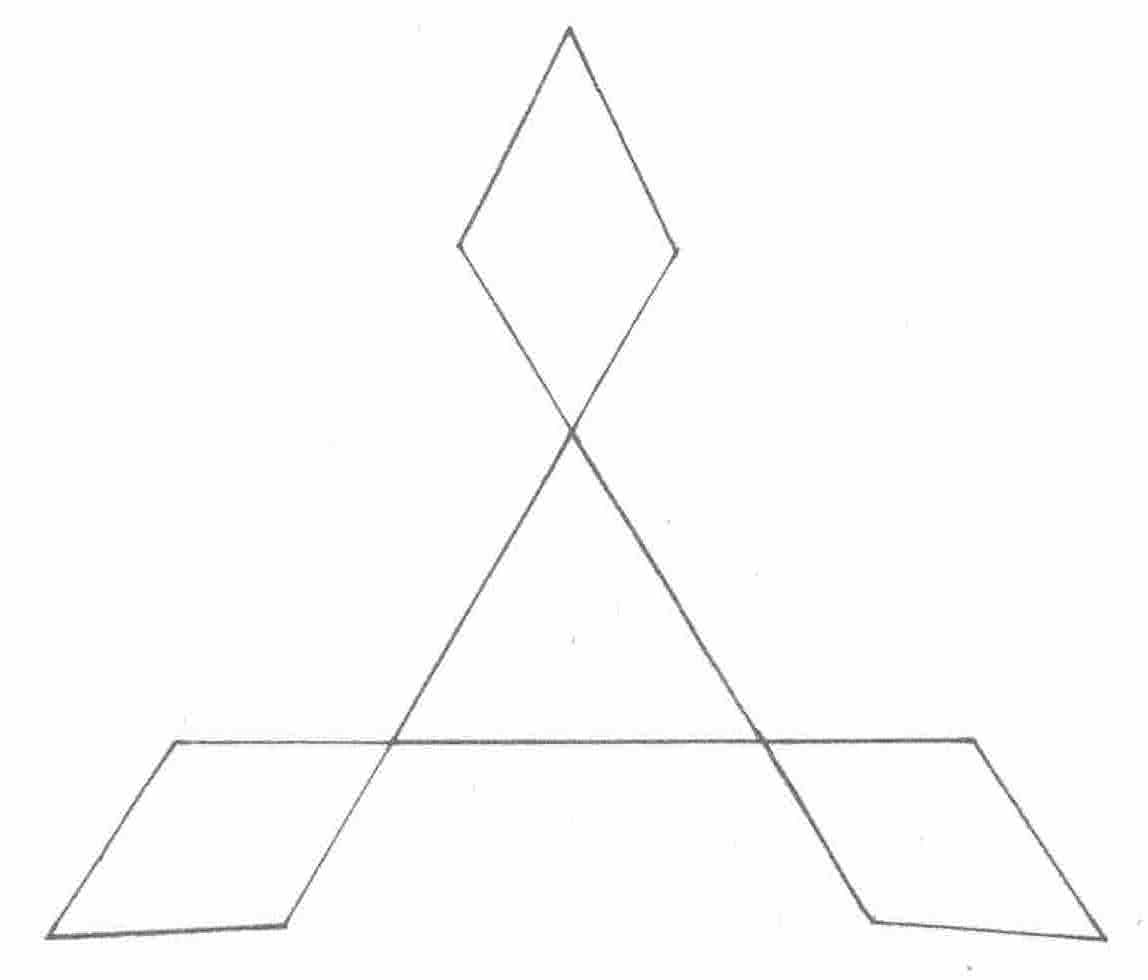 The Switching Glyph's characteristics align it with counterfactual equivalent switching.  But switching plays out like roulette (the gambling game) rather than making possible the stated goal of context sensitivity.  Equivalent switching collapses the dynamic logic of The Glyph into a circular bind.

The characteristics of switching and binds come from constraining The Glyph, an indicator of relationality within a given system, such that each rhombus shape carries the same tension pair and paradoxical resolving phenomena (PRP).  The parity between the switching and standard Glyph means that the capacity of the later, which is to enhance logic through translational perceptual functioning (including accurate context sensitivity) is lost in the act of equivalent switching.  With switching, logic is reduced to a counterfactual mental device to enhance the tautological aspects of reality.

I refer to switching and the types of logic that result as immature counterfactuality. As such, seeds are a suitable metaphor. The switching triangle is the zygote, the tensions are the seed coat, and the PRP is the protective exterior -- representing hardening of positions due, ironically, to being too reasonable for our own good. 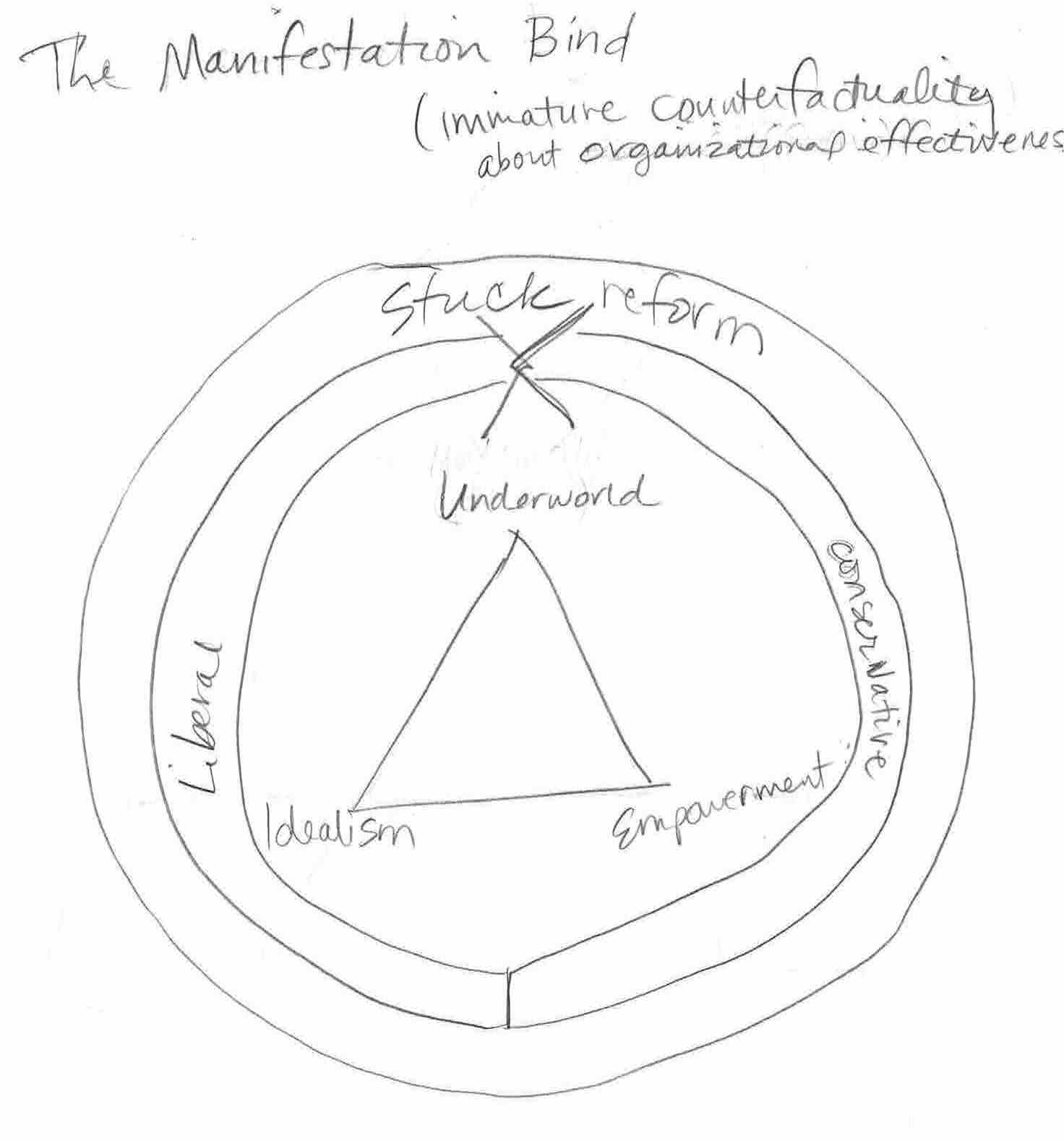 Looking at the Manifestation Bind, liberal and conservative are tensions A and B. The tensions steadying the bind do not leave (in a fundamental way) no matter how much switching is done. They are existentially true oppositional states that cannot nor should be vanquished.  (That's more complex to explain that I can cover in this piece.)

What can and should be undone is the reliance on switching equivalents.  It logically necessitates the emergence of a paradoxical resolving phenomena to contain the counterfactual folly. Taken as a whole, the logic available from switching equivalents, like the Blame Game, creates more predicaments than it solves.

Somewhat obviously, Greater Good social contracts fail to manifest inasmuch as they are held in place by the paradox of stuck reform (ironic).  What is less obvious is that, the otherwise rationally sensible way to arrive at Greater Good logic, namely through considering counterfactual alternatives, not only gives rise to the very paradox that entrenches ineffectiveness (yes, doubly ironic), it also limits our ability to imagine something different (triply ironic).

The general model is one of immature counterfactuality, where social reinforcement (many people sharing equivalent competing beliefs) are bound to certain overarching tensions and ironies, as demonstrated in the three ring social circus of gaming Greater Good in society.  Finally, I posit that Counterfactual Maturity, aimed at resolving the folly of slight-of-hand counterfactuality, opens the door to healthy social contracts.

Counterfactual Maturity is a reflection of aware connection with existence through accurate translational perception.  The Glyph is the structural representation of that intangible process.  Greater Good as represented below uses The Glyph in its unbound form, with relational nodes that capture the dynamics that make up counterfactually mature Greater Good. 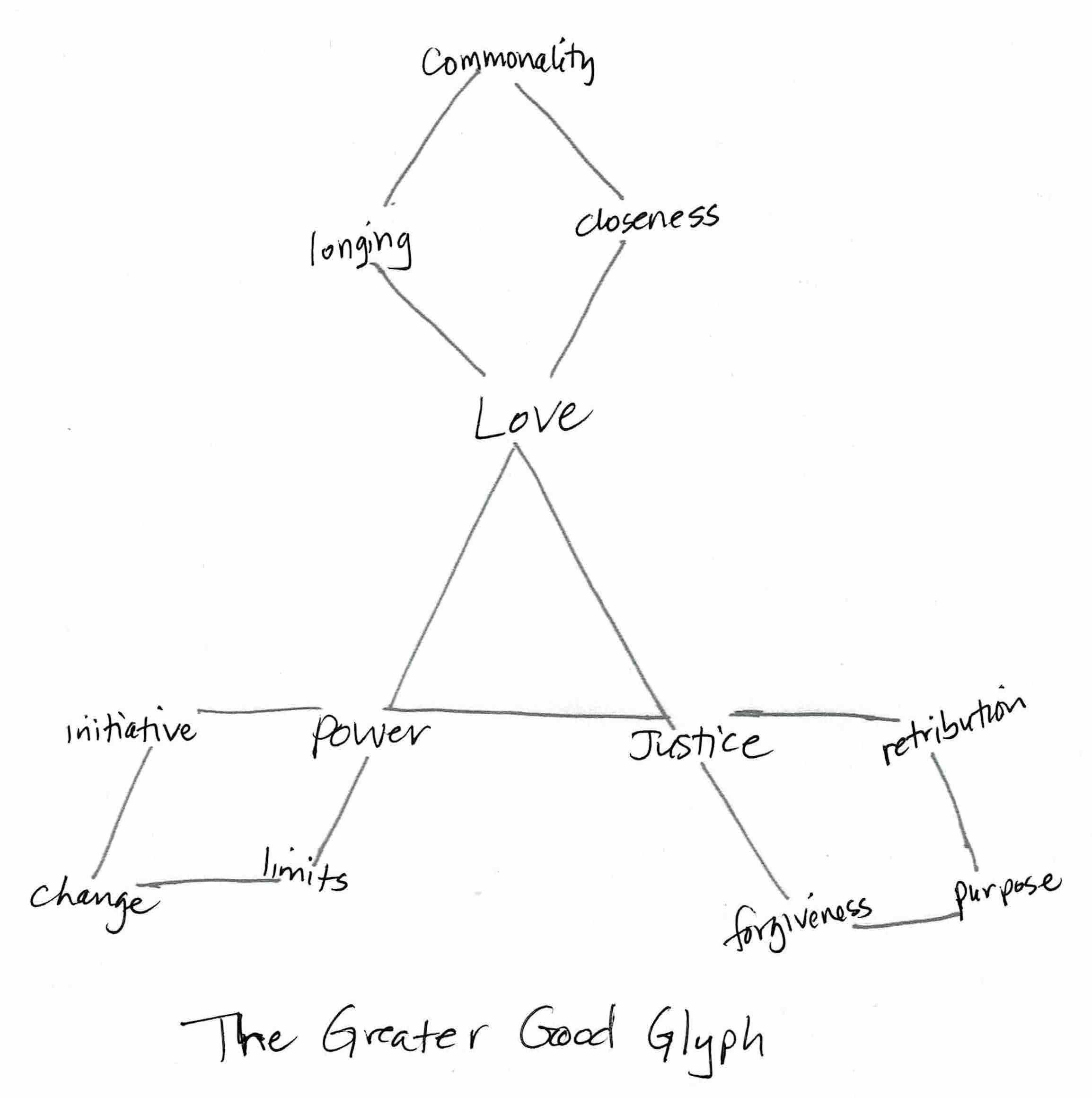 These dynamics are articulated in long form by Paul Tillich in his 1954 book Love, Power, and Justice.

The seed that is the immature Manifestation Bind can mature into the all encompassing context of Greater Good through the ability to work constructively within the intangible structuring of existence.

Those skills can be naturally arising or cultivated here through the open resources and current teachings I offer.